While it is true that men's emerald rings are not as common as mens ruby or sapphire gem stone ring. There are some very important things related to emerald rings that you should be aware of. Most jewelers do not care to inform buyers about such things. In this report we will analyze, discuss and educate you about things that you should know before you choose a mens ring with emerald gem stone. Though we make reference to one of the Kaisilver mens emerald rings, most of the information in this report is useful for just about any emerald ring that you have in mind. Many jewelers do not educate buyers on such important issues so do spend some time reading and understanding the contents. Let us first of all mention a few interesting facts about emerald gem stones. We will then explain how these facts relate to an emerald ring. Do not expect to find much sales talk here as it is not our objective to pull in jewelry orders through this website. 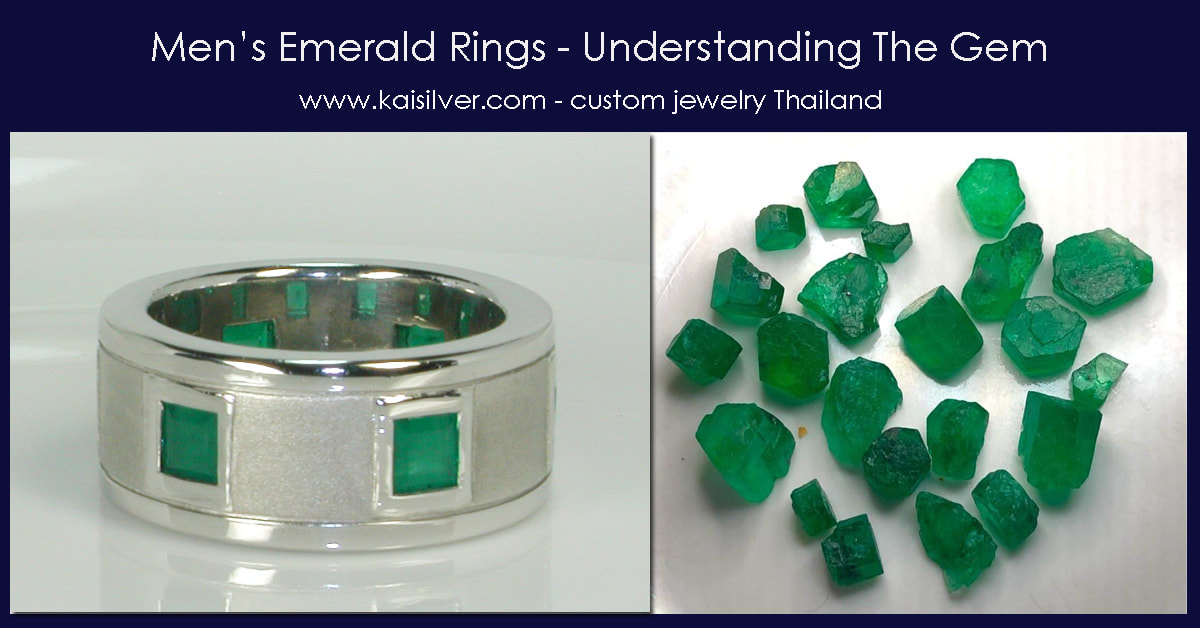 An emerald is a variety of beryl, it is generally green and can sometimes show mild color tints of blue. The color of the gemstone in your men's emerald ring can be a pale green or a very deep green. Emerald gems with good transparency are generally preferred by gem and jewelry lovers. You might come across very deep green emeralds that have almost opaque, such gems should not be very expensive. Lower priced mens emerald rings in Asia can sometimes be seen with such low grade emeralds that can weigh around 4 to 7 carats. When it comes to good grade emeralds, gems with a size abouve 3 carats can be quite expensive.

We often get enquires for ladies and mens emerald rings where the buyer, requests for an eye clean emerald gem stone. Here is some very important feature related to emerald gem stones that you should know. All emeralds will show natural inclusions and fissures. When we say all, we mean all natural emeralds mined from the earth. We do not refer to factory made emerald substitutes. Emeralds take millions of years to be formed, and these inclusions and fissures get into the stone during it's long formation period. Cheap, medium priced and high priced emeralds will always have inclusions and fissures that can be seen with the naked eye. So if you are hunting for an emerald mens ring with an eye clean emerald stone, give up the futile search.

Low grade emeralds can be almost opaque, the high density of inclusions in these gems cuts of almost all light that could pass through the gem. Such emeralds do have a place in the gem and jewelry world. Many people who believe in the special powers of emeralds, look for cheap men's emerald gem stone rings in gold or silver, low grade emeralds are suitable to fulfill such requirements. An emerald men's ring with a medium grade emerald gem would have a stone that has inclusions but, still shows a visible degree of transparency. High end mens emerald gem rings would include good quality emeralds. You should not expect the gem in the highend mens ring to be eye clean. A good grade emerald would have fewer inclusions and fissures, these would also not be concentrated in any single portion of the stone.

When selecting an emerald men's gem stone ring, you should presume that the gemstone in the ring has been treated to enhance it's beauty. An ancient oil treatment for emeralds, has been practiced for many centuries. Almost 85% to 95% of emeralds used in the jewelry industry today are enhanced by the oil treatment process. The stone is soaked in natural oils, the internal fissures get filled with the oils. The visibility of the internal flaws in the emerald gem stone is softened because of the oils. The emerald shows better lustre and some gem manufacturers claim that, oil treating the stone can also make it more durable.  Oil treating rubies is accepted even by seasoned gemologists. The acceptability this treatment can be gauged by the fact that, even emerald gems and jewelry carefully preserved in museums are periodically treated with natural oils.

Now keeping the issues related to inclusions and fissures and emerald oil treatment in mind, we can move ahead to discuss essential features of a good men's emerald gemstone ring. The design of your emerald mens ring should take the characteristics of the gem stone into consideration. The internal fissures in emeralds increase the possibility of the stone cracking or chipping with physical impact. For this reason it is recommended that, the stone in your men's emerald stone ring be set almost flush with the surface of the ring. It is obvious that the more the gem protrudes from the ring, the more likely it is to get hit by or against hard objects. Make sure that this feature is incorporated into your emerald ring for men.

If you look at any faceted gem you will notice that, the maximum depth (thickest part of the gem) is towards the center of the stone. The gemstone thins out towards the edges, making the edges more vunerable to breaking or cracking. A mens emerald ring with square or rectangular gemstones needs some thought regarding gem setting. A good gem setting for an emerald stone is where the entire edge is bordered with metal. If this is just not possible because of design limitations, at least cover the pointed corners with 'L' right angled shaped prongs. While this is a good setting for all gem stone rings, it is more important in the case of emerald gem stone rings.

The size of the emerald in a mens ring would obviously influence the price tag, emeralds can be expensive as the stone size increases. This would be true even for medium grade emerald gems and not just the better quality stones. While your budget might be accomodate an extravagant gem in your mens emerald gem stone ring, there is something that you need to be aware of. A large stone is more likely to get damaged by physical impact, it is more likely to hit against hard objects like tables or walls. The researched design of the MAN71 Kaisilver mens emerald ring takes care of this issue in a great way. The gem stone size in this ring has been limited to 6mm.

Metal weight is an issue that is intentionally pushed aside by jewelers. In a bid to woo mass markets, jewelry manufacturers today produce jewelry that is grossly underweight. This is clearly visible in mens rings where gold weight is sometimes as low as 7 to 8 grams. Unfortuntately readymade silver jewelry is also being treated in the same way. While we do agree that there is no 'standard' metal weight suitable for all mens rings, a fair indicator can be set for this parameter. Should a mens emerald ring weigh less than 15 grams, don't even waste your time looking at the jewel. A minimum metal weight of 18 to 20 grams is what we would recommend. The weight requirement could increase depending on the ring size and other dimensions. The point is that a light weight men's gem stone ring cannot be sturdy, it will bend and deform easily. Many problems related to loose gemstones can also be traced to insufficient metal weight.

Should you choose a gold or sterling silver emerald men's ring? The decision on metal is normally based on personal preference, it is obviously influenced by your budget too. One very useful suggestion that we always make relates to durability and strength of a jewel. It is always better to have a sturdy and longlasting silver ring as compared to a light weight flimsy gold ring! Another consideration for a choice of gold or 925 silver emerald mens ring is related to the gemstone. We learnt above that all emeralds are treated with oils to enhance their beauty. It is necessary to leave the oils intact to maintain the beauty of the stone. If you did choose a silver emerald ring you would have to handle the tarnish factor. Tarnish is a slight discoloration of all silver that happens over a period of time. Fortunately there are commercial solutions that can be used to polish silver jewelry and remove the tarnish. Having said that, you need to make sure that no residue of the polishing solutions remains in contact with the emerald. Gently rinse the emerald in cool water after the tarnished ring has been polished. Chemicals if left clinging to the stone can seep in and affect the natural oils inside. If your jeweler gives you stories about anti-tarnish plating with rhodium, gold or platinum, just remember that all platings on silver are temporary and will wear off in time.

The above information covers most of the features and issues that you should be aware of before selecting an emerald mens ring. This is irrespective of where you buy your ring from. Kaisilver is not the only source for your jewelry requirements however we are the only jeweler to provide clear, straightforward and honest advice on issues related to gems and jewelry. We will have absolutely no problem if you get all your queries and doubts cleared from our support team and then, shop at another jeweler for the ring. Our support team which can be contacted at sales@kaisilver.com has been trained to provide solutions and help, we do not pressurize them with sales targets. Complete details and options available for the MAN71 Kaisilver mens emerald ring can be seen at http://www.weddingband.kaijewels.com/mens-wedding-band-emerald-man71.htm